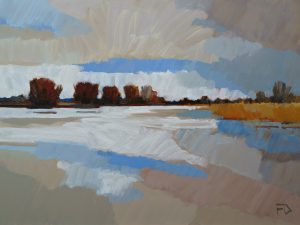 Forty years ago I came here by bike from Utrecht. Pedal all the way to find a landscape that reminded me of the polders of my childhood. An almost infinite space.

Year after year I come back. I’ve been here early in the morning and late at night. In cold and heat. The place has been changed by human hands and by the passage of time. The old ramparts have been removed. There were trees that I still miss. The water has continued to flow, sometimes slow and shallow, sometimes swirling high, sometimes even covered with ice floes.

Season after season I have found something new here. How many times have I painted here, each time with a slightly different look. Because everything is the same, but then again it is not. Because previous experiences stick to the place, the pleasant ones, but also the failures. Because as a young man I also stood here, impatiently, and now that my body can only just handle the stinging winter cold on a manger. Sometimes I really want to be here again, to be able to touch this world.

The reeds, the trees, the distance: they are familiar. It’s my place.

Kris Spinhoven exhibits more than thirty paintings in Gallery Achtendertig in Rheden. The Dutch coast, polder landscapes, Amsterdam cityscapes, but above all we see the French Prealps. There Spinhoven has been painting the mountains, the vineyards, the little streams, the space, the sky for over thirty years. The techniques are various: there are oil paintings, watercolors and drawings in sumi ink.

Spinhoven always paints on the spot, en plein air. Sometimes one session is enough. Usually the painting asks for the painter to return several times at the same hour, under the same light. That can be difficult, because nature (the weather!) is capricious. But the effort pays off. The space is sensible, the detail visible.

She lives and works alternately in Amsterdam and in the Isère.

Under the heading ‘publications’ you can read the book Paintings (text by Peter Hecht) and the book Mountain landscapes (several authors). 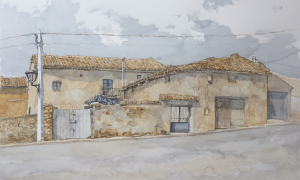 Bram Stoof (Enkhuizen 1959) is a contemporary painter based on observation. He mainly uses watercolor and oil painting techniques. However, he is capable to use the modest pencil either. The choice of subjects reaches from the human figure, through architecture and landscape, to still life.

Human beings have always carried the warm interest of Bram Stoof. He paints portraits on commission, painting live model is a popular activity. The painter is also active as a teacher in this profession.

In recent years, the emphasis has come to be the still life in oil paint, when he works in his atelier. When the weather is good, Bram Stoof prefers to work outdoors with watercolors, trees are a favorite subject.

During the first corona lockdown, a series of interior pieces in watercolor were created. The own living room turned out to be a source of inspiration.

Immediately striking about the paintings is the realistic rendering, in which a technique based on the classical method is characteristic. In the field of oil painting, the painter is self-taught, although he attended art academy.

After his studies in Kampen, Bram Stoof settled in Amsterdam, where he lives and works to this day.

Bram Stoof is a member of the Hollandse Aquarellistenkring and the Nederlands Portretschap. 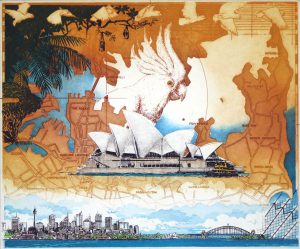 For over three decades, Rolf Weijburg has been reporting on his travels in complex colour etchings in which he fuses elements of cartography, culture, nature, history and architecture into intriguing compositions. Weijburg mainly works in large series, long-term projects that are all travel-related. For more than 15 years he travelled to all the islands around the African continent for the project “L’Afrique Périphérique – an Atlas of the Islands around Africa”, which eventually grew into a series of more than 90 colour etchings and for which he Received the Dutch Graphic Prize. Today, Weijburg is working on a new major project “An Atlas of the World’s Smallest Countries”, a series of colour etchings about the 25 smallest independent countries in the world. But other countries and many Dutch cities do not escape his etching needle.

Ton de Laat wrote in the magazine “Art and Science” (autumn 2012): “… What else do I find so delightful about Weijburgs art? I flee again in catchwords: drawing skills, suggestion of space, use of colour, humour, border decorations, image sequences, inserts, flora, fauna, lettering. Cloudy skies are the ultimate pleasure. To be able to create such an air! With zinc, molten resin powder, corrosive acid, printing ink and paper.

” In 2017, in collaboration with RTV Utrecht, a 40-minute documentary was made about Weijburgs work and travels, in which the origin of an etching is followed, from the journey and inspiration on an African island, through the work and craftsmanship in Weijburgs Utrecht studio, to the presentation of the etching at the opening of an exhibition. The film can still be seen on YouTube https://www.youtube.com/watch?v=ny724S_p2As&t=1106s 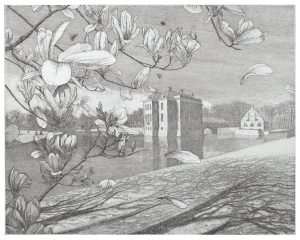 One person appreciates the craftsman in him, the other sees him as dreamer, a third as a poet; the truth is that all three come together in him. Homan’s work is in a long tradition of landscape etchers, who have been going back 500 years. He is a master in the expression of light, air, space and nature close to us, in a technique that leaves nothing to chance. He makes the wind rustle, the flowers smell in his prints. The freedom Homan finds in this is only possible if the technique is fully controlled. You experience that same all-encompassing freedom as a viewer in his prints.

A boy and his tree.

Peter van Straten once wrote a book with that title. It was about a lonely boy, who found support with ‘his’ tree. This was my book! I was that boy and that tree symbolized many trees and plants. Nonsense, of course, but sometimes a feeling is stronger than a reality. So, that boy is me! That boy was perhaps lonely sometimes and perhaps sought his balance in nature and became so fascinated that he wanted to share this. That boy became a draftsman and later an etcher. In the meantime, that boy has become a man, he still tells his ‘nature stories’ on the etching plate. Sometimes about trees, but also whispering reeds and threatening storms, old buildings in vast parks or fragile flowers in sunny meadows. Time goes on, just a little while and the boy, who became a man, will be an old man … but even then he will still remain ‘The boy of the tree’!

Since 2006 Karin Elfrink has been fascinated by the landscaping around the house in Beek-Ubbergen where she spent her childhood. The forests on the slopes of the Ravensberg, where she could be alone as a child and looked for protection under the foliage of close together standing trees. Later, as a painter she enjoyed the dynamism of the forest, the multitude of the colors green, the changing of light, but also of the static, the monotony, the peace. In paintings she gave these impressions, she wanted to allow the viewer to share in her experiences.

Being in the forest, she is already showing. She takes large sheets of paper to the forest and in the middle of her familiar trees she draws their presence with Indian ink. In the studio, looking at the drawings, which are also autonomous works, she makes the paintings. Look and memory come together.

Besides painting forests, Karin also likes to paint flowers. She does not paint them in a vase, but like you see them outside. With a visual freedom, which she also allows herself with the forest. 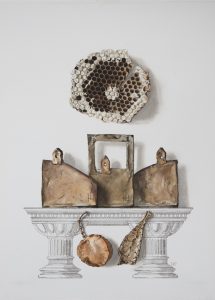 Ton de Laat (‘s-Hertogenbosch 1946 – Amsterdam 2016) was a self-educated artist. He was the (youngest) son of the Brabant graphic artist Hendrik de Laat (1900-1980), but he never took classes from his father. However, his father taught him “how to hold a pencil and a pen” and “how to look at things as if my eyes were a dissecting knife“.

For more than thirty years Ton de Laat has been affiliated with Galerie Petit in Amsterdam . This gallery focused mainly on lyrical realism in art, but Ton’s work cannot be categorized in any art movement. Reality is always has been his starting point though.

For Ton de Laat, drawing was the basis of his artwork. His artwork has its own language. His drawings, etchings and aquarelles are defined by refinement, intimacy, craftsmanship and humour. Subtleness is  a characteristic as well: looking at his work “with eyes like a dissecting knife” pays off.

His humor is exemplified by  the bookwork (with reproduced aquarelles) called “Mus Musculus; the reprint of an essay published in 1925 to reveal the historical identity, meaning and scope of the HUISMUIS (sparrow) ” (1991). With this essay, someone called A.H.M. the Laat hoped to obtain “a doctor’s degree from the University of Vistebjorg, Denmark ……” This folder is for sale in Galerie Achtendertig.

The exhibition includes a number of aquarelles that Ton painted from stamps he invented and made himself (including the perforated edges).

The etchings of the folder “Schelpen (Shells)” (2001) are displayed here as well. Ton made these etchings as a homage to the Haagse Etsclub (Hague Etching Club). Some copies of the folder are still for sale.

A serious book written by Ton de Laat is “Pillows and Worries, An Investigation into Historical Drawing Materials and Techniques” (2000). A number of copies of this pamphlet is also for sale at the exhibition. 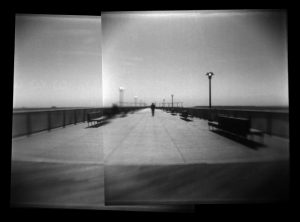 Chuck Baker was born in Somerville, Massachusetts, USA in 1953 and currently lives in Nijmegen, Netherlands.

The images in this exhibition are from two series. One is Hiding in Light, which include images from places that mean something special to me. The others are from a series in progress called The Reconstruction of a Moment. The idea for this came when I turned 60. It’s an attempt to manipulate the perception of time.

Technically, it’s a simple process though emotionally, it can be a bit more difficult.

Toy or manipulated cheap cameras are usually used, it depends on the vignette effect of the lens. Most are taken using film however I don’t discriminate between analog and digital. I consider cameras and film tools.

Multiple images are taken as if to reassemble into a panorama. These separate images are sometimes taken at the same time and sometimes a different day. The reconstruction of this moment is really an illusion. One might say that it’s an unreal moment that I have created.

The film is processed in my darkroom. I scan it for a proof sheet and to reconstruct the moment using Photoshop. Some finals are separately printed in the darkroom and manually constructed, using the digital file as a guide, while most are printed using the digital file. I try to do as little Photoshop manipulation as possible to keep any artifact degradation to a minimum. These are then pigment ink printed on a dedicated archival printer. This series of images is starting to evolve into 3 dimensional finals. I’m additionally experimenting with making large digital negatives and printing them using darkroom processes.